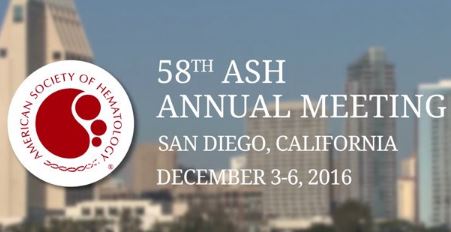 AbbVie Inc. & Janssen – Ibrutinib (IMBRUVICA®). PCYC-1121-CA Phase II trial assessed ibrutinib as a single-agent treatment for marginal zone lymphoma patients that received one or more prior therapies including at least one CD20-directed regimen. In the study, 79% of patients experienced some tumor reduction (50 out of 63 patients) and ORR was 48%. Abbvie based a new sNDA submission on this study in September 2016. More here

AbbVie Inc. & Janssen – Ibrutinib (IMBRUVICA®). In a Phase II Study of Ibrutinib in Chronic Graft Versus Host Disease after Failure of Corticosteroids with a median follow-up of 14 months in 42 patients, an ORR of 67% was found. 1/3 of the patients had a CR, with 71% of responders having a sustained response of at least 5 months. The results of this trial lead to breakthrough designation for this indication and plans for a pivotal trial. More here

Alexion Pharmaceuticals, Inc.- ALXN1210. In an interim analysis (N=13 patients) of a Phase 1/2 dose-escalation study of ALXN1210 in patients with paroxysmal nocturnal hemoglobinuria, ALXN1210 resulted in rapid, complete, and sustained C5 inhibition. LDH levels were rapidly reduced in all patients. FACIT-Fatigue scores improved in both cohorts, but improvement in patients was 2.1-fold greater in the higher dose cohort (1800 mg), consistent with better hemolytic response. More here

Celgene Corporation – Lenalidomide (Revlimid®). The German CLL M1 study shows that maintenance therapy with lenalidomide after front-line chemoimmunotherapy substantially prolongs PFS in patients with high-risk CLL. 60 received lenalidomide and 29 placebo. After a median observation time of 17.7 months, the HR for PFS was 0.198 (95% CI 0.083 to 0.475, stratified by MRD level at randomization). The median PFS in the placebo arm was 14.6 months, and was not reached in the lenalidomide arm. The study was stopped early because of the positive results at interim analysis. More here

Kite pharma – Axicabtagene Ciloleucel (KTE-C19 – anti-CD19 CAR T Cells). ZUMA-1 trial enrolled 111 patients (101 pts received KTE-C19) with chemorefractory aggressive NHL. With an ORR of 76%, the study met the primary endpoint with 47% CRs and 29% PRs. 92% of responses occurred within the 1st month, and 39% of patients had ongoing responses (CR in 33%) at 3 months. Responses were seen across key covariates, including refractory subgroup (refractory to chemotherapy=76%, relapse post ASCT=80%). Kaplan-Meier estimates of progression-free survival at 1 and 3 months were 92% and 56%, respectively. More here

Novartis AG – CTL019 (anti-CD19 CAR-T cell). The global Phase II registration trial of CTL019 in pediatric and young adult patients with r/r B-cell acute lymphoblastic leukemia found that 82% (41 of 50) of patients achieved complete remission or complete remission with incomplete blood count recovery in interim analysis. In addition to filing CTL019 for approval with the FDA in early 2017, Novartis plans to file with the EMA later in 2017. CTL019 received PRIME (PRIority MEdicines) designation from the EMA earlier this year. More here

Paxman – Orbis Paxman Hair Loss Prevention System. Scalp-cooling device safe and effective in reducing chemotherapy-induced alopecia in women with Breast Cancer. An interim analysis of 95 patients receiving at least 4 cycles of neoadjuvant or adjuvant anthracycline- or taxane-based chemotherapy revealed that more than 50% (48/95) of women in the cooling group had hair preservation compared to 0% (0/47) in the non-cooling group. More here

MSD – Pembrolizumab (KEYTRUDA®). Patients receiving pembrolizumab in the KEYNOTE-024 trial report better quality of life than those on chemotherapy. Previous data from KEYNOTE-024 demonstrated a superior PFS and OS in pembro arm as first-line therapy for patients with advanced NSCLC with PD-L1 expression on greater than 50% of tumor cells and no sensitizing EGFR or ALK aberrations. More here